Our Team is ready for your Call to Action

In the beginning, it was on November 1st of 1970 when Dale Willey opened his first franchise to a Pontiac-Cadillac franchise. In September of 1990, we added the GMC Truck & SUV franchise, and then in 1996 on January 1st, we added the Buick franchise. Finally, in 2010, the Chevrolet franchise was added giving us the ability to be a full line-full service General Motors dealer of Trucks & Cars & SUVs.

Our original owner Dale Willey started his automotive career in June of 1961 and was the sole owner that opened up his first franchise of Pontiac & Cadillac on November 1st, of 1970 here in Lawrence. Then in September of 1990, we added the GMC Truck & SUV franchise, and finally, in 1996 on January 1st, we added the Buick franchise. Our owner then became partners with our current owner Greg Maurer in November of 1998, who started his career in the retail automobile business beginning in 1983 in central Illinois and moved to Lawrence Kansas in January of 1993. He worked his way up from Parts & Service Manager to the Fixed Operations Manager, and then he earned the General Manager position prior to becoming the sole owner of Dale Willey Automotive in 2014. Finally, back in 2010, the Chevrolet franchise was added giving us the ability to be a full line-full service General Motors dealer of Trucks & Cars & SUVs.

On March 1st, 2019, we acquired the local Honda store in Lawrence and are currently servicing and offering Sales & Leasing of New and Pre-Owned Honda's. We are excited to announce that we are going to move all Honda personnel into a couple of newer buildings that will be larger and have the ability to grow new business for both Service and Sales and accommodate our customers with new and upgraded facilities that they deserve. Please be patient with us during this next full year and during our construction and repaving events.

On May 22nd of 2019, we acquired the legal ownership of the local Chrysler Dodge Jeep and Ram Truck store right behind the Honda store and could not be more excited for our local residents. We are already up and rolling for both Sales & Leasing of New & Pre-Owned Chryslers, Dodges, Jeeps, and Ram Trucks. We have a state of the art newer building for both Sales and Service and look forward to meeting and servicing all of our potential customers.

Throughout this exciting year of new acquisitions, we have not waivered on how we do business.

Our basic long-term principles of doing business have been and still are 3-fold;

1. "All individuals must be respected" [respect by family, co-workers, & customers].

2. "Our customers must be given the best possible service" [every individual & department should focus on customer service].

3. "Excellence & Superior Performance must be pursued" [each individual's job tasks should be accomplished in a superior fashion].

We look forward to doing business with YOU! 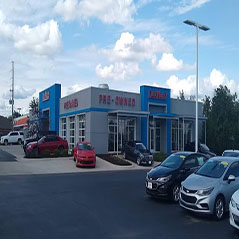